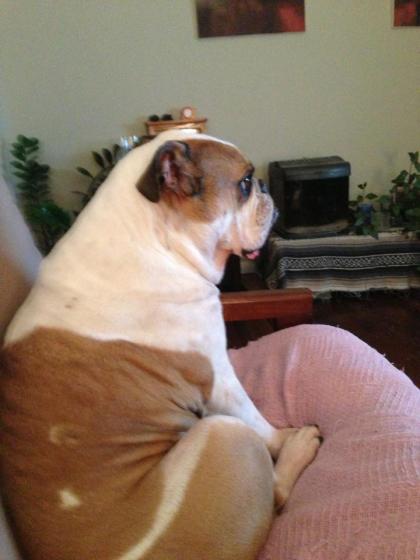 This will be a rough posting to write.  And potentially hard to read.  But it’s my truth.  Where I am right now.  It needs to be heard.

As I sit here Sunday morning, the city is quiet, snow is melting, birds flying around.  Baxter, my companion, best friend, and bulldog, is lying on his blanket.  Dying.  Friday morning we played in the snow, sniffed other dogs, and had a nice day leading up to the nap.  From which he woke up different.  Off kilter.  Not right. His vet saw something in an X-ray that raised concern.  So off to another vet, with access to an ultrasound, we went.  Baxter stayed with them Friday night and Saturday morning, the ultrasound was completed.

A tumor sitting on his spleen.  Most likely malignant.  With surgery, he gets 1-3 months; with chemo 3-6.  Without, he has days.  Maybe hours.  Because bulldogs have a higher complication list from surgery and he’s lived 10 amazing years, I brought him home.  I pulled his futon mattress onto the floor and there we spent the night, watching netflix, drinking wine (me, not him), and scratching/kissing/licking each other often.  He made it through the night.  But he knows.

People frequently say how a pet saved their life.  For Baxter and me, he did.  When my ex, Mike, died suddenly, my life went into this crazy tailspin and to a really dark place.  I didn’t know how to breathe, to eat, to move, to be in the world.  But I did have a bulldog.  Who every morning woke me at the same time daily with a nose in my face and a snort of impatience.  His morning walk was the only reason I got out of bed for the first months.  If not for him, the covers would have been pulled up higher and I would have retreated more.  It was during those walks I began to realize – the sun still rose in the East; birds and squirrels continued to get up and moving early; life, in every form, carried on.  And with Baxter and the encouragement of the rising sun, I carried on and began to heal.

I got to have Baxter in my life for 10 amazing years.  Memories of the night we met; the day he chose his name; he’s crazy love for watching CAPS hockey on TV; his crazy tweets (@Baxter_tweets); his personality has always been part mine, part Mike, all him.

I imagine at some point in the next week or so, I’ll wake up and have to realize on my own that the sun is still rising in East, that birds are still flying, squirrels still running, and that my life will carry on.  And Baxter, he’ll be with Mike playing tug of war.  After he’s bitten Mike a few times on the ass for us both.

I don’t set resolutions.  I think by their design, we are set up to fail.  We as a people put such a high level of power in achievements, be it to get in shape, stop smoking/drinking, eating differently.  One of the bigger problems I have with resolutions personally is that many of them are selected due to societal pressure.  We need to look a certain way, dress a certain way, and all of that bullshit.

The practice of Forrest Yoga has us feel into our spirit and set an intention.  By connecting where we are going directly to our spirit, we begin to create something within us that’s powerful.  It’s a pact with ourselves.  We set an intention as a guide for the path ahead.  Intentions do not dictate the steps we take, but intentions do influence our choices along the trail.

My intentions for the year ahead revolve around self-improvement, discovery, and living.  More to come I’m sure on each of these throughout the year as I dig deeper and I’ll close with a line from Madonna’s “Rebel Heart” song that fits me well – “I said ‘Hell yeah! This is me, right where I’m supposed to be.'”